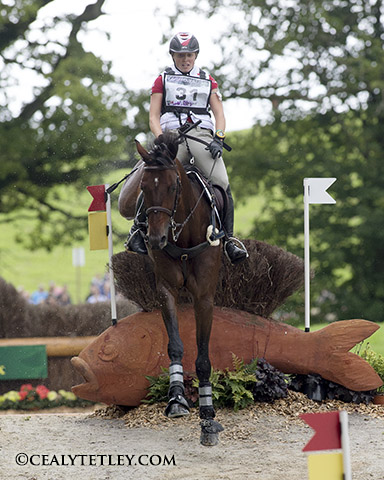 The Canadian Eventing Team tackled a challenging cross country course on August 30 to move up to seventh place at the Alltech FEI World Equestrian Games 2014 in Normandy, FRA.

Team Canada will go forward into the final show jumping phase on August 31 on a score of 324 penalties after admirable performances over a challenging cross country course that saw 26 of 91 riders withdraw, retire, or get eliminated. Footing was a big factor on the course, due to a substantial amount of rain received in the area over the past week at the spectacular Le Pin National Stud venue in the Ornes region, which resulted in a modification to the original course created by FEI 4* Course Designer Pierre Michelet of France.

One hill loop and two obstacles were removed to bring the total number of jumping efforts to 42, resulting in an adjusted optimal time of 10 minutes and 30 seconds – which proved to be unattainable, with all riders adding time penalties.

Despite the challenges, Jessica Phoenix of Cannington, ON put in the ride of a lifetime, incurring no jumping penalties aboard Don J. Good’s 12-year-old Westphalian gelding, Pavarotti (Pavarotti VD Helle x Foxiland). This was a truly incredible feat, considering that it was Pavarotti’s first time ever encountering a course at the 4* level.

“Pavarotti was amazing for his first 4*. I could just cry. That horse is so incredible. He has maturity beyond his years, and I’m just so excited for his future,” said Phoenix, the reigning Pan American Games Individual Gold Medalist for Eventing.

Phoenix’s impressive performance moved her up in the standings from her dressage position of 35th to 28th.

“I definitely didn’t push him for the time. I just let him cruise around,” explained Phoenix, who added 33.6 cross country time penalties to her dressage score of 50.2. Her total score heading into the final show jumping phase is 83.8.

Next on the leaderboard for Canada was Selena O’Hanlon of Kingston, ON, who has represented Canada at four major games and was part of the Silver Medalist Eventing Team at the 2010 FEI World Equestrian Games in Kentucky, USA.

Partnered with Foxwood High, John and Judy Rumble’s 11-year-old Canadian Sport Horse gelding by Rio Bronco W, O’Hanlon had just one spot of trouble on course, incurring 20 penalties for jumping partially outside the flags and having to re-do jump nine, which was one of three water complexes featured in the course.

“I just got such a bold jump into the water, and I didn’t want to pull back on him. He’s green, and he was going so strong and a little bit flat up the bank,” she explained. “He couldn’t see what was on the other side, and he just drifted left and got the white flag between the legs.”

O’Hanlon negotiated the rest of the obstacles cleanly for no further jumping penalties, but added 39.6 time penalties for a total cross country score of 59.6. Once added to her dressage score of 49.5, she has a total of 109.1 heading into show jumping, and is currently sitting 43rd individually.

After three of the first six horses failed to complete the course, Barry was the seventh rider to set out, and gave the Canadian team heart by putting in a positive ride and negotiating the entire course.

“The footing was a little bit ‘holding,’ so I tried to just come home to give the others a chance to go for it, knowing that one of the teammates made it home,” said Barry.

“I missed my turn a bit at the double corners early in the ride, and that was my mistake,” explained Barry about his run-out at a tricky line of two fences modeled after the stables at Le Pin National Stud, which proved to be a trouble spot for many

throughout the day. “It was a very forward-going track and you had to really attack it, but I think we managed it well. I’m very proud to have completed.”

Thanks to his solid ride cross country, Barry shot up 25 spots from his dressage placing to take over the 49th position on a two-phase total of 131.1.

Although Hawley Bennett-Awad of Langley, BC crossed the finish line, she did have refusals on course, and after review, was later eliminated with Gin & Juice, a 14-year-old Thoroughbred mare by Audio that Linda Paine co-owns with Bennett-Awad.

“The course rode way tougher than I thought it was going to. I’ve never ridden in footing like that, and Gin & Juice hasn’t either, and she really didn’t get comfortable in it,” said Bennett-Awad of her ride. “But, she’s sound and happy and tomorrow is another day.”

Technical Advisor for the Canadian Eventing Team, Clayton Fredericks was proud of the team’s performance overall.

“The course was pretty gruelling on the horses today, but our horses have pulled up exceptionally well, so we are very pleased. Our riders went out there and gave their best, and tried very hard,” he explained. “Just to finish three team members is a pretty impressive feat over this course, so we are very pleased with that.”

Leading the pack heading into show jumping is Team Germany. Great Britain is in second, with Australia following in third. British rider, William Fox-Pitt, who is currently the number one ranked Eventing rider in the world, is on top of the individual standings aboard Chilli Morning.

Next up for the eventers will be a horse inspection at Le Pin National Stud early on August 31. Afterwards, the horses will be shipped under police escort to D’Ornano Stadium in the nearby city of Caen for the final show jumping phase and the Team and Individual medal ceremonies.

Complete results and current news from the Alltech FEI World Equestrian Games are available at www.normandy2014.com.

Detailed information on the Canadian Equestrian Team can be found at www.equinecanada.ca/cet.

Live broadcasts of the Alltech FEI World Equestrian Games 2014 can be viewed on the FEI TV website.