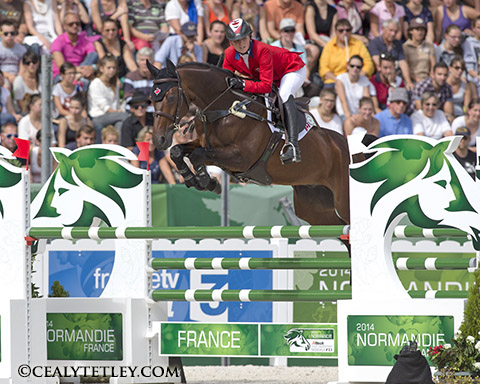 The Canadian Eventing Team hung on to their seventh place finish at the conclusion of the final show jumping phase on August 31 at the Alltech FEI World Equestrian Games 2014 in Normandy, FRA.

After completing a demanding cross country course at the Le Pin National Stud venue in Ornes on August 30, three Canadians presented their horses for inspection early the following morning. All three horses passed the inspection and were loaded up for a 45 minute trailer ride to the D’Ornano Stadium venue in the city of Caen, where the final show jumping phase was held.

Phoenix added 16 jumping penalties to her overall score to finish on a total of 99.8 for 29th position.

“He’s never been in an arena this huge before with that much atmosphere. I think he was just a little bit starstruck when he went in,” explained Phoenix of Pavarotti’s four rails, two of which happened at the start of the course. “Towards the end of the ride, I felt him settle, and then he was back to jumping the way he normally does.”

“These Games have been a great experience for Pavarotti. I think with his first 4* being at the Games, we couldn’t have asked anything more from him. I’m incredibly pleased overall. He was amazing, and I’m really excited for his future,” added Phoenix, who is the 2011 Pan American Games Individual Gold Medalist, having won in Guadalajara, MEX.

Canadian Olympian, Selena O’Hanlon of Kingston, ON also had a solid finish aboard a horse who is relatively green at the 4* level.

Paired with Foxwood High, John and Judy Rumble’s 11-year-old Canadian Sport Horse gelding by Rio Bronco W, O’Hanlon had a stellar dressage performance, followed by a cross country ride that saw just one hiccup at a water obstacle that caused problems throughout the day. She came into show jumping in 43rd position, but moved up two spots to end in 41st after lowering four rails for 16 jumping penalties. Her total score after all three phases was 125.1.

“I knew it wasn’t going to be a course suited to him, because all of the distances were tight,” said O’Hanlon of the show jumping track, which featured many tricky related distances, including straight and broken lines. “This course just didn’t suit him, but the Games have been super. I have a great horse, and a great team.”

Peter Barry of Dunham, QC, was elated with his finish at the second major games of his career. The first rider into the stadium for Canada, he exited to roaring applause after putting in a clear round aboard Kilrodan Abbott (Clover Brigade x Leabeg), a 15-year-old Irish Sport Horse he co-owns with Dylan and Susan Barry.

“It felt very good to go clear. I had hoped to go clear, show jumping is our strong point. I was looking forward to it, and I’m glad it came through for me,” explained Barry, who also represented Canada at the 2012 London Olympics. “Kilrodan Abbott felt great in there. He was very supple. I think he was well prepared and he felt in good shape. He was a really good boy.”

His stellar performance in show jumping allowed Barry to finish on his cross country score of 131.1 for 43rd place individually.

“Overall, if you go to these Games and you don’t like it, it’s your fault,” joked Barry about his experience in Normandy. “I’m very happy to have been here, it’s a great competition and was such a cool experience.”

Unfortunately, the fourth Canadian Eventing Team member, Hawley Bennett of Langley, BC, did not move forward to show jumping. Although Bennett did cross the finish line of the cross country course, she did have refusals, and after review, was later eliminated with Gin & Juice, a 14-year-old Thoroughbred mare by Audio that Linda Paine co-owns with Bennett-Awad.

“We’ve got a lot to work on still, but I’m very proud of the team overall,” said Clayton Fredericks, Technical Advisor for the Canadian Eventing Team. “We’re here at a true championship and everything is up to standard. But, our riders performed their personal best dressage – every one of them. That is something that every coach dreams of being able to do at a championship.”

Phoenix echoed Fredericks’ comments, stating, “I think it’s a really exciting time to be Canadian, and we’re really looking forward to the Pan American Games and the Olympics.”

Winning Team Eventing Gold at the Games was Germany, followed by Great Britain in Silver, and The Netherlands in the Bronze position. Germany also dominated the podium as individuals, with Sandra Auffarth taking home the Gold Medal aboard Opgun Louvo, and Michael Jung riding Fischerrocanna FST to Silver. The Bronze Medalist was Great Britain’s William Fox-Pitt aboard Chilli Morning.

For all the latest information on the Canadian Equestrian Team, go to www.equinecanada.ca/cet.

Catch all the action of the Alltech FEI World Equestrian Games 2014 live through the FEI TV website.