Is Your Sports Drink Really Quenching Your Thirst and Replenishing Electrolytes?!

Is Your Sports Drink Really Quenching Your Thirst and Replenishing Electrolytes?! 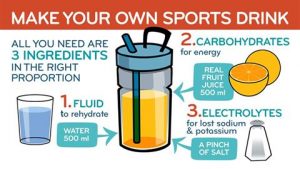 Sports drinks touted as the beverage of athletes are nothing more than a quagmire of unhealthy ingredients most of which are considered carcinogenic. These so called refreshing beverages contain nothing more than a pinch of salt, a drop of potassium, additives and One Hundred Percent Processed Sugar.

Although these products are supposed to replenish electrolytes after exercising, in reality, they can actually cause an imbalance. Due to its inherent high sugar content, sports drinks have also been shown to cause obesity in children. As well, excessive sugar consumption shuts down our immune system for up to eight hours leaving our bodies susceptible to illness and disease including cancer.

The following are some of the ingredients found in sports drinks.

Gum Arabic – Used as a thickener

Citric Acid – A sharp-tasting crystalline acid present in the juice of lemons and other sour fruits, made commercially by the fermentation of sugar and used as flavouring and setting agent.

Brominated Vegetable Oil – BVO is used to stabilize the citrus flavour in many varieties of sports drinks.  BVO is used as an industrial flame retardant and has banned from food products in various countries. It has been reported that excess consumption of BVO can cause skin lesions, memory loss, tremors, fatigue, loss of muscle coordination, and headaches.

Sodium Citrate – May be referred to any of the sodium salts of citric acid such as Monosodium citrate, Disodium citrate and Trisodium citrate. Sodium citrates are used as acidity regulators in food and drinks and also as emulsifiers for oils. They enable cheeses to melt without becoming greasy.

Monopotassium Phosphate – A soluble salt of potassium used as a fertilizer, a food additive and a fungicide. It is a source of phosphorus and potassium. It is also a buffering agent.

High Fructose Corn Syrup (HFCS) – Also known as glucose, fructose, isoglucose and glucose fructose syrup which is a sweetener made from corn starch that has been processed by glucose isomerase to convert some of its glucose into fructose. As a sweetener, HFCS is often consider even more of a health concern than granulated sugar and has been linked to obesity. Advantages of HFCS over granulated sugar include being easier to handle, and being less expensive in some countries.

Dextrose – Dextrose, a form of glucose (sugar) derived from starches. It is one of the most commonly used ingredients in packaged foods because of its affordability and wide availability

Sucrose Acetate Isobutyrate – A clear liquid food additive that works as an emulsifier, which means it helps mix water and fat. More specifically, the food additive helps distribute and suspend the flavour oils in a drink. It’s made by combining sucrose, which is sugar, with the chemicals acetic anhydride and isobutyric anhydride. Sucrose acetate isobutyrate is odourless but has a bitter aftertaste if used in high amounts

Colorants (Food Coloring) – Although commonly used in foods, drugs, cosmetics and medical devices, studies have shown that dyes contain known carcinogens and contaminants that unnecessarily increase the risks of cancer, hyperactivity in children and allergic reactions. Common ingredients in food coloring may include Corn Syrup, Glycerin (found in soap), High Glucose Fructose, Granulated Sugar, Sorbitol (artificial sweetener known to be a carcinogen), Yellow #5 and #6, Red #3 and #40, Blue #1 and #2, Sodium Benzoate (used as a preservative), Potassium Sorbate (used as a preservative) Agar Gum (thickener) and Carrageenan (Carrageenan is extracted from red edible seaweeds, commonly referred to as Irish Moss. Although widely used in the food industry for their gelling, thickening, and stabilizing properties carrageenan can cause stomach upset and is regarded as a carcinogen), just to name a few.

Please note that a Carcinogen is any substance or agent that tends to cause cancer.

Yummy! Now you know why I do not recommend these products. Try drinking water after exercising or prepare your own homemade sports drink using three simple ingredients:

Dissolve a pinch of salt in 500 ml warm water than add the 500 ml juice, mix and enjoy.

Ian can be reached at ian@ianharris.ca. You can also follow his nutrition tips on Facebook at: https://www.facebook.com/nutritionequestrianathlete or visit http://www.ianharris.ca/