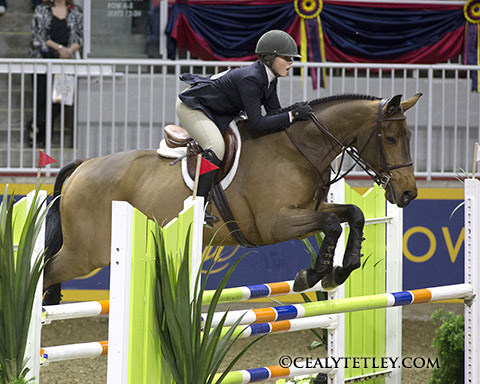 Nora Gray of Owen Sound, ON won the 25th edition of the Running Fox CET Medal Final on Nov. 7 at the Royal Horse Show in Toronto, ON.

Gray, who is co-trained by her parents and brother (Jennifer, Jim, and Robert) was proclaimed the 2013 winner after receiving the highest total score over two phases and a final test.

“(My mom) has been my trainer my whole life so I’ve always had lots of experience riding different horses,” said Gray. “She’s always been there for me, and my whole family was here for me today, so that was fantastic.”

The initial Flat/Gymnastic phase took place on Nov. 6 and challenged riders to display a wide range of skills, including counter canter, flying lead changes, turn on the haunches, turn on the forehand, single and double bounce combinations, and a four-part combination.

Gray took second place in this phase and brought a score of 87 forward into the Jumping phase.

After navigating a course featuring multiple broken lines, a triple-bar, and a triple combination, Gray was given the top score of 90, earning first place in the Jumping phase and bringing her total score to 177. This ride also secured Gray’s place in the final test that was asked of the four riders with the highest combined scores.

“(After wining the Jumping phase) I was really confident going into the ride-off. And, I had a great horse and knew I could trust him,” explained Gray, who was competing in the CET Medal Final for the second time.

The final test required riders to complete a shortened course that involved jumping from a trot, hand-gallop, and counter canter. Gray’s smooth execution of the test solidified her overall win.

Sarah Barker of Hamilton, ON, Haley Stradley from Aldergrove, BC (who won the Flat/Gymnastic phase), and Paige Mawson of Toronto, ON joined Gray in the final test, and finished second, third, and fourth, respectively.

A special awards ceremony followed the completion of the final test. CET Medal founder Barbara Anderson was on-hand to present the awards, and was also honoured with tokens of appreciation for her support of Canada’s equitation riders over the 25-year history of the series.

When asked if the CET Medal has become everything she hoped to establish, Anderson said, “I think it’s all that and more because of the advancement of the riding in the last 25 years. And the riders are certainly far more sophisticated than they were 25 years ago.”

Anderson believes the increased sophistication of the riders is most apparent in the flatwork. “In my opinion the class was won yesterday. The rider who could fulfill all of the requirements on the flat rose to the top, and today it was just filtering out the top four or five,” she said.

Long-time CET Medal sponsor Debra Smith of Running Fox was also in attendance during the awards ceremony, presenting Gray with the champion prize of a brand new Childeric saddle. Additionally, the top eight riders received coolers, while all 16 entries were given a Walsh halter.

The CET Medal is designed to provide up-and-coming riders with the chance to gain the necessary foundation to transition from hunter to jumper. As an equitation competition, riders are judged on their style, position, and ability to navigate a jumper-type course. Qualifiers take place in four regions across Canada and culminate with Regional Finals. The top 16 riders are then invited to move forward to the series final at the Royal Horse Show.

For more information on the CET Medal, visit www.equinecanada.ca/jumpcanada.

4 / Paige Mawson / Under Pressure / Toronto, ON