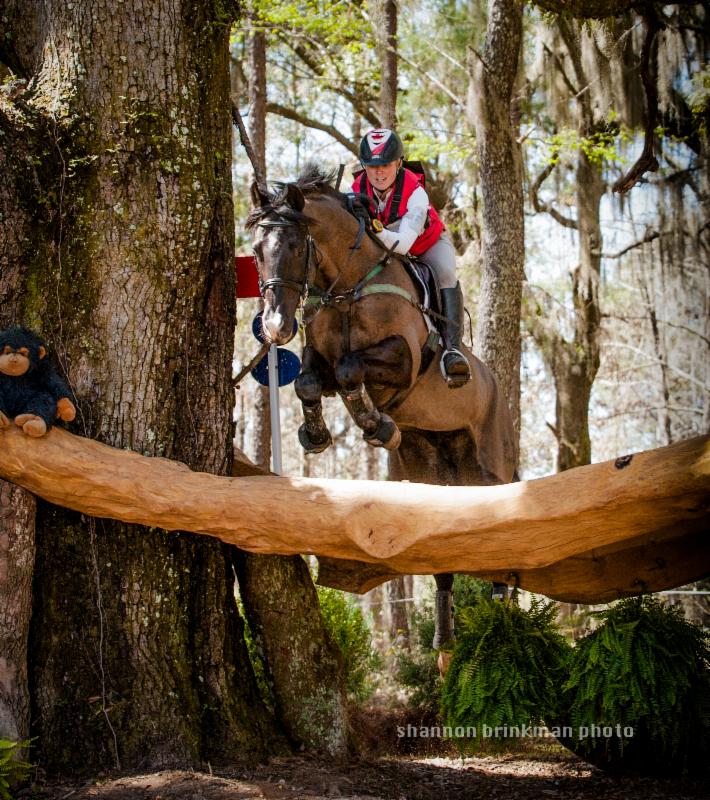 Heavy rains on Thursday’s opening day may have caused some competitors to tweak their riding style but that wasn’t enough to stop 2012 Olympian Jessica Phoenix of Cannington, ON, from taking the top Canadian spot in the CIC3* division.  Aboard Patras VR, Kirk Hoppner’s 13-year-old Trakehner gelding, Phoenix lead-off the competition earning 48.60 penalties in dressage landing them in a tie for 11th place.

On Friday Phoenix and Patras VR took two rails for eight faults in their show jumping round bringing their overall score to 56.60 before heading into Saturday’s cross county phase. The pair had a foot perfect performance on the newly designed track by new course designer Hugh Lochore, but took on 20.80 time penalties to finish with 77.40,  giving the duo tenth place overall.

“I had a great weekend at Red Hills and the highlight was being surrounded by such wonderful people including my husband and son! My goals coming into this event were to have competitive dressage scores and to go clear in the show jumping and cross country. For the next couple of months we’ll be working on improving our dressage and increasing the fitness levels for all of the horses. We will be looking forward to CIC competitions at Poplar Place, The Fork, the CCI at Ocala and Jersey over the next couple of months. I would like to thank the amazing team of people that make all of this happen, the owners of our horses at Red Hills; Kirk Hoppner, Charlotte Schikendanze, and Anita and Don Leschied, as well as our entire Canadian team support staff including coach Clayton Fredericks,” said Phoenix.

Pulling double duty in the CIC3* division, and rounding out the top 15 was Phoenix aboard Abbey GS, a 13-year-old Trakehner mare owned by Charlotte Schickedanz, to 14th place with a final score of 89.10.

In the CIC2* division, Waylon Roberts of Port Perry, ON, took Yarrow, his own and Kelly Plitz’ seven-year-old Canadian Sport Horse gelding, to a 12th place finish with a final score of 66.50. In show jumping the pair took two rails closing out their day with 54.10 penalties. In the final day of competition Roberts and Yarrow came back with a clear cross country earning 12.40 time penalties. Also competing in the CIC2* were Jamie Kellock of Cedar Valley, ON, Lesley Grant-Law of Ocala, FL, Lauren Clark of Uxbridge, ON, Dasha Ivandaeva of Tottenham, ON, April Simmonds of Uxbridge, ON, and Anita Nemtin-Gilmour of Palgrave, ON.

In the CIC 1* division Carter took third place with his second mount, Elena Ceballos’s Cooley Nothing Better B, an eight-year-old Irish Sport Horse gelding. The pair finished on their dressage score of 46.60 penalties after clear performances in the show jumping and cross country phases. Also landing top ten in the CIC1* division was Julie Clark, of Newmarket, ON and Cool Disguise, her eight-year-old Thoroughbred Cross gelding, who finished in seventh place with a final score of 48.80.

Also competing in the CIC 1*division were Carter on a third mount, Shawn Ferguson of Caledon, ON, Cristina Barbour of Shelburne, ON and Sable Giesler of Powassan, ON.