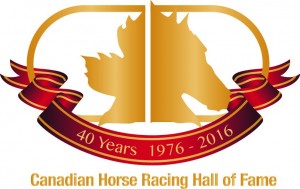 2016 marks the 40th Anniversary of the Canadian Horse Racing Hall of Fame. Since the inaugural class of people and horses were inducted in 1976, there are now over 500 honoured members in the CHRHF. The public is invited to participate in the nomination of horses and people who have made a significant contribution to Canadian horse racing, for induction to the Canadian Horse Racing Hall of Fame in 2016.

Nominations for the following will be considered:

For further information, or to submit a completed nomination form, contact:

All submissions will be carefully considered by the Nominating Committee and if approved, presented to the Election Committee for voting by secret ballot.

The final list of the 2016 Canadian Horse Racing Hall of Fame Inductees will be announced on Tuesday, April 5, 2016.

The 2016 Induction Gala will be held Wednesday, August 3rd, 2016 at the Mississauga Convention Centre.