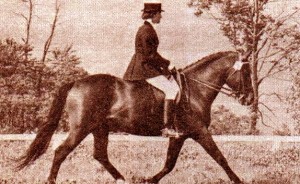 The Ontario Equestrian Federation extends deepest condolences to the friends and family of the late Susan “Sue” Rothgeb, who passed away on September 29, 2015 at the age of 78.

Rothgeb was born in Okmulgee, Oklahoma and moved to New Mexico as a young girl. She was involved in dressage for most of her life and bred sport horses at her home farm in Alexandria, Ontario.

Rothgeb was a dedicated competitor, coach and judge before retiring as an FEI judge in 2009 after judging extensively in North America and Europe. As an active dressage coach, Rothgeb devoted herself to instructing riders from training level to Grand Prix.

Committing herself to the development of dressage in Canada, Rothgeb volunteered most recently as Chair of the Dressage Canada Board (2009) and Chair of the High Performance Committee (retired 2010).

In 2010, Rothgeb was inducted into the Glengarry Sports Hall of Fame. Her passion for horses was demonstrated right up until this summer as Rothgeb continued coaching, learning and judging throughout her life.

A memorial of Rothgeb’s life will be held in late October. To honour her memory, her family has requested you perform an unexpected and random act of kindness in her name.

The DC Officials committee wishes to honour and recognize Sue Rothgeb’s contribution to Canadian Dressage and in particular to the development of Canadian Officials.

To that end we are announcing that the Officials Bursary has been renamed the Sue Rothgeb Officials Development Bursary. Bursary funds will be distributed as available in Sue Rothgeb’s memory to deserving applicants commencing in 2016.

Should anyone wish to donate to this bursary, please contact Christine Peters, Dressage Canada.